Your gateway to the largest tropical cyclone database on the web.

The Pacific Typhoon Seasons of 1884-1944 have been reanalysed.

Beginning in August 2017 and ending in February 2019, we worked on producing track maps for over 1300 tropical cyclones in the Western Pacific Ocean that occurred between 1884 and 1944.

All tracks will appear on the website in due course. 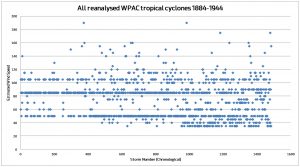